Earlier in the year I described the essential elements in redesigning a literary magazine with Interlitq as our case study. The Interlitq redesign continues. The current timeframe is a June completion date, which is delayed from my original intention of April. The delay is largely due to my teaching schedule. I completed the multimedia storytelling course, which had a complex web project, in April. And barely more than a week later started teaching an innovations in publishing course during our mini-spring term, which is just 4 weeks. Once spring term is over, I’ll have more time to wrap up the Interlitq project. Also, I have a graduate student from the University of Tennessee School of Information Sciences collaborating with me over the summer on literary magazine redesign and library publishing.

Let’s review the quantity of material that has been published in Interlitq since its origin in November 2007: 26 issues + 6 ongoing series. That represents over 500 contributors in a variety of genres (essays, interviews, poetry, fiction) as well as more than 20 artists contributing nearly 200 works of art for illustrating the publication.

That amount of material requires a content management system (CMS). Since its beginnings in 2007, Interlitq has existed in a set of custom PHP files where each work (essay, interview, poem, story, etc.) was stored in a separate PHP file. Each contributor biography also existed in a separate file. While static sites offer significant advantages, the integration of content and code and style in this fashion is a nightmarish scenario for migrating to a new design and more efficient form of publishing. The Interlitq site consists of over 4,000 files that need migrating to a new system.

For the redesign, I chose WordPress for the CMS because of its broad level of support and customization. While a tool like Grav presented a lot of interesting possibilities, I simply wasn’t ready to jump into developing a Grav-based site considering the limited time availability I have for working on this project.

The Interlitq blog has existed separately on wordpress.com since the blog started. With this redesign we will be bringing the blog into same new design as the overall site. The blogging component gives WordPress another advantage since WP is a premier platform for blogging. And, honestly, another reason for choosing WP is that I’ve worked with it since 2004. So I’m very comfortable with the WordPress way.

Let’s look at a few new design aspects that will be appearing in Interlitq.

The previous design had a listing of past issues as show below.

The new design is a grid layout of issues and series represented by its distinctive artwork.

The CMS allows the grid to be automatically generated when a new issue or series is added.

One of the more problematic aspects of the old design is that the contributor list simply existed alongside the left column of the page. That worked fine for the first few issues but now with hundreds of contributors, the list scrolls far beyond the footer of the page: 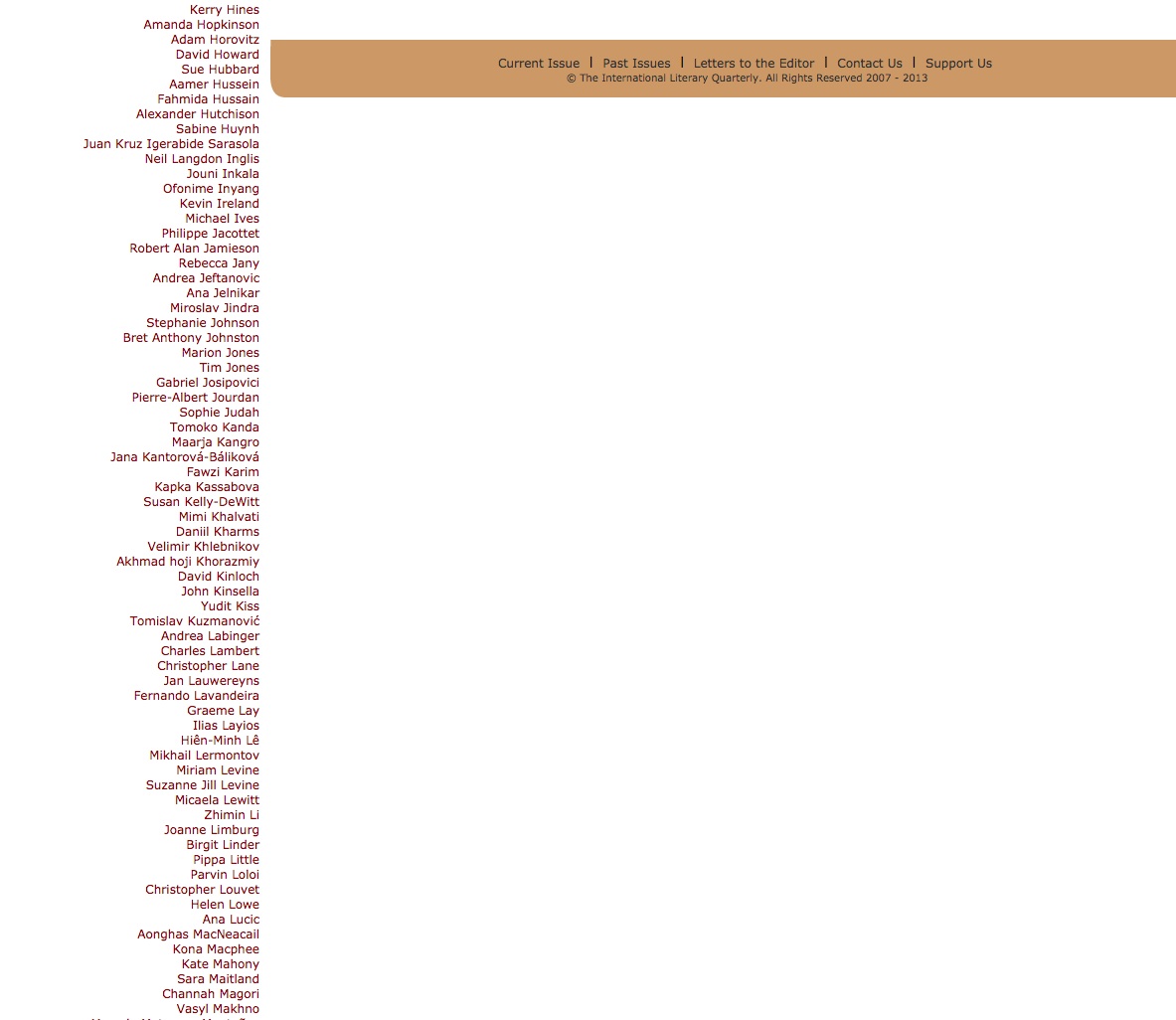 A database-drive site allows for the contributor listings to be presented in a dynamic manner that features the author photo with the author’s name (which is actually a link to the author’s full bio on the site). This approach also allows optional text to exist below each author photo. For the prototype below, I simply added some placeholder text but this text could be a quote from the author’s work on Interlitq: 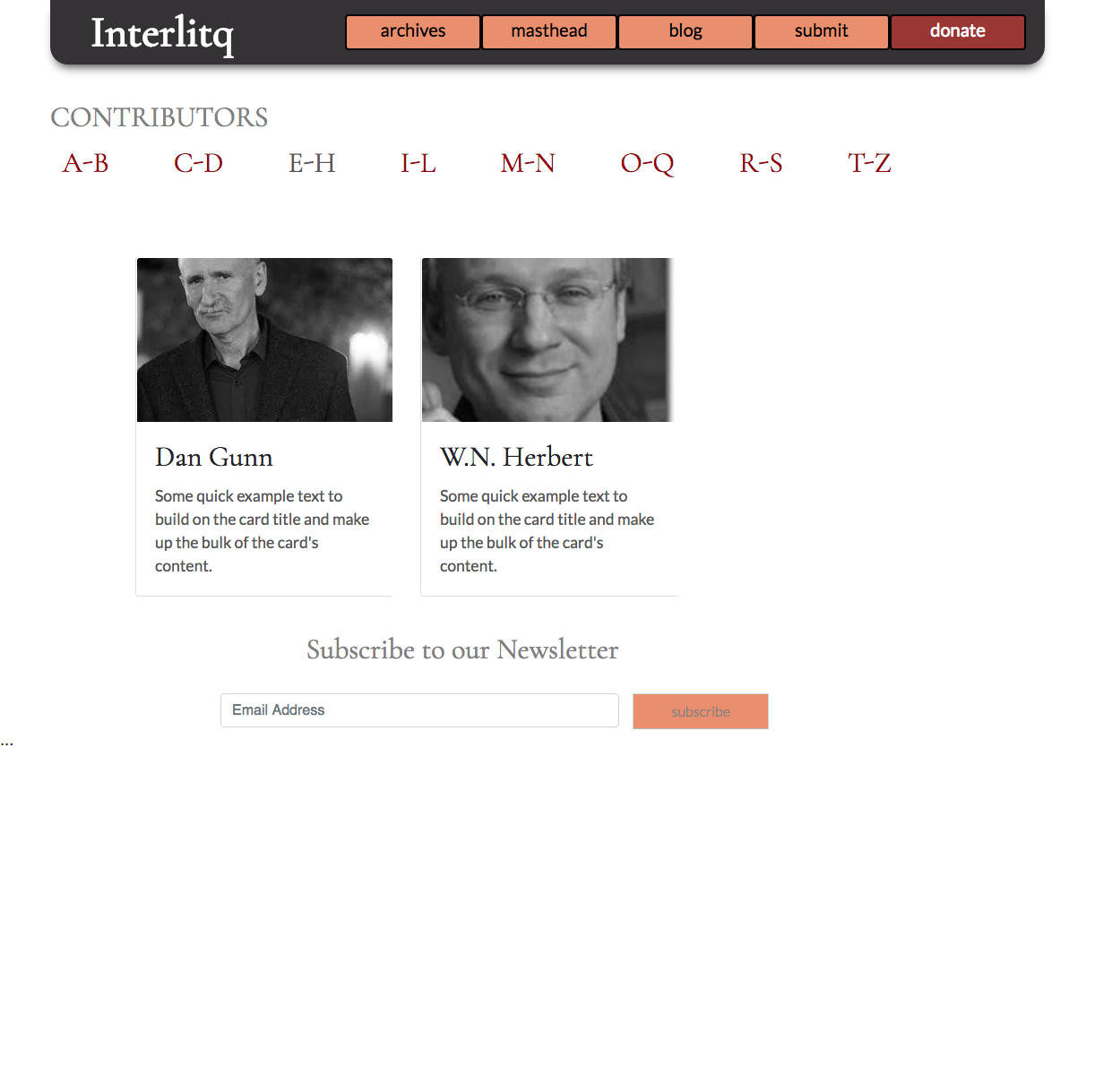 Obviously, this represents a small sample of the hundreds of authors that appear in Interlitq. The alphabetical row above the author photos allow for the contributor list to be segmented into smaller group for displaying on the page rather than loading the giant list all at once.